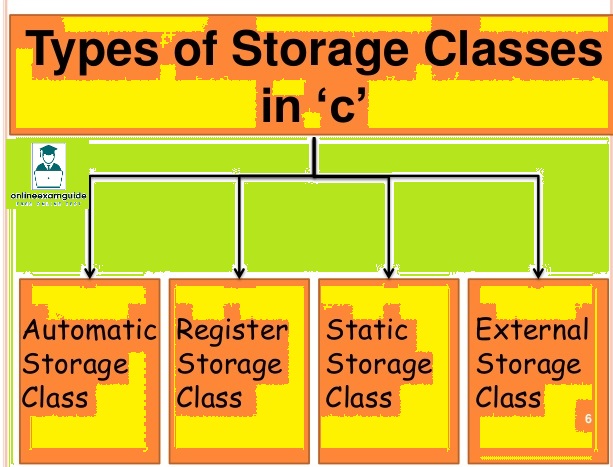 A programming language should deal with different types of data. The type of data can be a Whole number, Real number or Character string. C language comes with predefined data types like int, long, float, double and char. We use the word define when we are initializing or assigning a constant value to a variable.

Different Types of Buckets hold different types of Data. A bucket can be thought of like a memory location. C Programming Data Types and Storage Classes Tutorial

Integers are whole numbers without any decimal points. Size of an int variable is 4 bytes maximum in a 32 bit compiler. In 16 bit old compilers, size of int is only 2 bytes. ‘u’ is appended to define unsigned int variable. To represent signed variables, keyword ‘signed’ is not required. You can use if you want. Compiler will not through error.

To scan unsigned in values, format specifier ‘%u’ is used.

To print unsigned int values, format specifier ‘%u’ is used.

Size of a short variable is 2 bytes which is half the size of an int variable.

To scan unsigned short values, format specifier ‘%u’ is used.

To print unsigned short values, format specifier ‘%u’ is used.

Float numbers are simply real numbers with decimal points. You can append letter ‘f’ to define a floating point constant. Size of a float variable is 4 bytes.

C char data type is used to represent or store letters and symbols. Its size is only 1 byte.

what are storage classes in c

A Storage Class in C language decides the following.

Each and every variable in C language requires both Data Type and Storage Class. By default, ‘auto’ storage class is applied to a variable.

how many storage classes in c

There are four types of Storage Classes in C language. Keywords used to declare or define C storage classes are auto, register, static and extern.

An ‘auto’ storage variable is stored in memory. This memory is called Stack Memory.

Default value of an auto storage variable is garbage value or random value.

Scope of an auto variable is local to the block where it is defined.

Life of an auto variable is till the execution control stays within the block where it is defined.

In the below example, variable ‘a’ is declared without ‘auto’ keyword. But the compiler treats variable like auto variable only. There is no need to explicitly mention ‘auto’ storage class. It is applied to variables by default.

As there is no value assigned to variables, output of the above program is just garbage values. A garbage value is simply a random number of declared type. Here the random value is int type.

In the above example, outer a=20 is different from inner a=10. Curly braces define a block in C language. So, a=10 is cleared from memory after the block. So after printing a=10, execution control goes to outer printf to print a=20. After completion of the block, scope and life of an ‘auto’ variable dies.

In the above infographic image, an auto variable is compared with an AUTO CLOSE BOOK. For each new person, page number of the book is new and random. There is no stored value between function calls.

Default value of a Register storage variable is garbage value.

Scope of a Register storage variable is local to the block where it is defined.

Life of a Register variable is till the execution control stays within the block where it is defined.

Static variables are stored in Data Segment Memory instead of Stack Memory.

Default value of a static variable is Zero.

Scope of a static variable is with in the block or function where it is declared.

Life of a static variable exists till the program execution ends.

In the image above with a computer and books on a table, a static variable is like a book with a pen. You can keep pen to maintain page number. Even if you close the book (function or block ends), pen maintains the book number. Next time you open the book (subsequent function or block calls), last page number is maintained.

If you open many windows in a computer and press sleep button, the computer goes to sleep. Once you wake the PC again, all programs are restored with the previous state. Similarly, the value of a static variable persists between function calls. Once you shutdown (program execution ends) the computer, all programs (variables) are removed from memory.:

Extern variables are stored in Memory or RAM.

Default value of an extern storage class variable is Zero like static variable.

Scope of an extern variable is global or the entire program.

Life of an extern variable is until the program execution ends.

When to use external variables?

To use external variables in your program, you need to do two things.

To use a variable that is not defined until the execution point use ‘extern’ keyword.

In other programming languages, the order of definition of global variables is not important.

You can make your program variable available to included C Files using the extern keyword.

In other programming languages, the order of definition of global variables is not important.

what are storage classes in c MCQ

B) break, else, long, switch

‘intern’ is not a keyword. Remaining are all valid keywords.

B) short, unsigned, continue, for

D) sizeof, volatile, do, if

‘var’ is not a valid keyword.

A) static, while, break, goto

construct is not a keyword.

4) Find a correct C Keyword below.

5) Find a correct C Keyword below.

All C Keywords are in lower case.

9) signed and unsigned representation is available for.?

Real numbers like float, double and long double do not support unsigned representation.

11) Size of a GCC or Visual Studio C Compiler is.?

13) Sizes of short, int and long in Visual Studio or GCC compiler in bytes are.?

Advantage of an unsigned representation is only to increase the upper limit i.e positive limit. Size of a char remains same i.e 1 Byte.

Default assumption is Turbo C/C++, 16 bit compiler. Size of an int is 2 bytes for both signed and unsigned representation.

16) Size of float, double and long double in Bytes are.?

17) Range of singed long and unsigned long variables are.?

A) A Positive number

B) A Negative Number

For negative numbers 1 is used as a left most bit.

20) If you do not specify a storage class for a Variable.?

A) You get compiler error.

B) You get a compiler warning.

Yes. Even if you do not specify a Storage class for a Variable, AUTOMATIC storage class is applied.