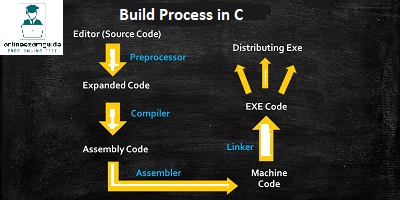 To create and execute C programs in the Windows Operating System, we need to install Turbo C software

The source file will be sent to the compiler whenever we press Alt + F9. When a source file is received, the compiler first looks for errors. The compiler returns a list of errors if there are any, otherwise it converts the source code to object code and saves it as a file with the extension.obj. The Linker receives the object code after that. The Linker creates an executable file with a.exe extension by combining the code from the specified header file and object code.

After completing compilation successfully, an executable file is created with a .exe extension. The processor can understand this .exe file content so that it can perform the task specified in the source file.

We use a shortcut key Ctrl + F9 to run a C program. Whenever we press Ctrl + F9, the .exe file is submitted to the CPU. On receiving .exe file, CPU performs the task according to the instruction written in the file. The result generated from the execution is placed in a window called User Screen.

Execution Process of a C Program

The file which contains c program instructions in a high-level language is said to be source code. Every c program source file is saved with .c extension, for example, Sample.c.

Whenever we press Alt + F9 the source file is submitted to the compiler. Compiler checks for the errors, if there are any errors, it returns a list of errors, otherwise generates object code in a file with name Sample.obj and submit it to the linker. The linker combines the code from specified header file into an object file and generates executable file as Sample.exe. With this compilation process completes.

Then we press Alt + F5 to open UserScreen and check the result of the program.

1) What is the input file in a C program building process.?

Obviously, it is a C file with some code.

2) What is the output Filename of C Program build process ?

Yes. There will one Exe file created with the same name as the.C file.

3) What is the first step in C program building process?

Preprocessing deals with #define macros, #pragma, #include and other commands.

4) What is the next step to Preprocessing in C Program build process.?

5) What is the next step to Compiling in C program build process.?

An assembler converts Assembly code from compiler and converts it to Object code or machine code.

6) What is the next step to Assembling in C program build process.?

A) A C compiler

B) A C assembler

You can any editor for typing and editing C code.

8) What is the output of C Compiler compiling.?

A) An assembly language code

9) Expanded Source code is the output of which C program building process?

B) Exe file does not work in Linux or Unix machines. So different type of output is create on different machines

C) Linker produces a suitable output file for each maching