Basics of c language for interview 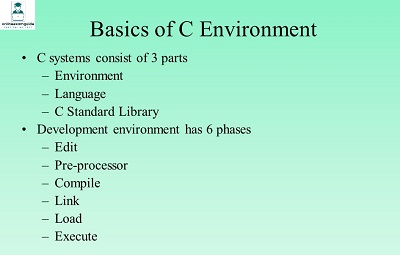 Basics of c language for interview

We shall learn about basic structure of a C Program and predefined Keywords in this C Programming Syntax Basics Tutorial Part 1. You can set up a Turbo C Compiler on your Windows Machine easily.

Structure of a C Program

Every C program contains a function or method called main(). All functions end with Round Brackets or Paranthesis ( ). Inside Paratheses, arguments can be received or passed. Code of a Function is surrounded by Curly Brackets or Braces { }.

Keywords in C Language (Basics of c language for interview)

There are a total of 32 keywords in C Language which can not be used for the names of variables and functions. Find the C Programming Keyword list below. Students need to remember these keywords just like that to attempt questions asked in their exams.

2) C Language is a successor to which language.?

C is a high level language. Another example is BASIC.

B) language with big program size.

D) Difficult to understand and readability is questionable.

B) language with small program size.

D) language which is difficult to understand and not human readable.

Examples are C and BASIC.

C is a procedural language. It is written in a number of steps using statements and functions. Logic is clearly depicted in the program. Procedural language is aslo called Imperative Language. Examples are COBAL, BASIC etc.

8) What is the present C Language Standard.?

10) C language was invented in which laboratories.?

C was invented in Bell Laboratories in New Jersey.

B language is successor of BCPL ( Basic Combned Programming Language ). B language was invented by Ken Thomson.

12) C language was invented to develop which Operating System.?

13) C language was invented in the year.?

14) C language is used in the development of .?

D) All of the above

D) All of the above