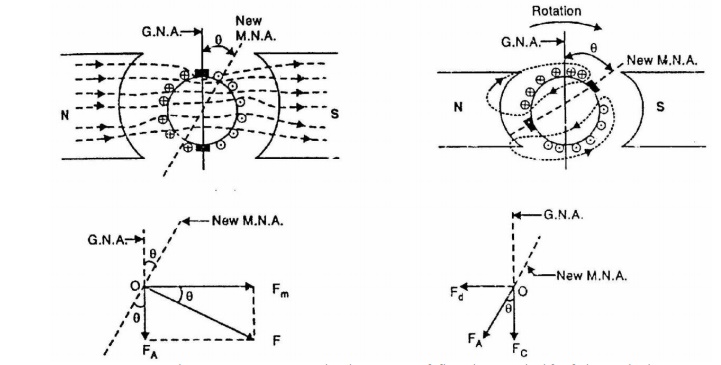 what is Armature Reaction

The flux per pole in a DC machine that is not loaded is solely determined by the field current because the Armature current is Vanishingly small. When the Armature also carries current because of loading, the lines of force are no longer Distributed Uniformly. Flux lines are Concentrated in one half of the pole while being rarefied in the other. One can argue that the flux per pole will remain the same under loading conditions compared to no load operation because the increase in flux in one half will be Balanced by a decrease in flux in the other half.

Since the flux per pole determines the emf Generated and the torque produced by the machine, it appears that Armature reaction will not have any impact on the Machine’s performance. When the machine is lightly or Moderately loaded, this is actually almost Accurate.

However, due to saturation, the flux increase in one half of the pole is less than the flux decrease in the other at rated armature current. In other words, when the machine is sufficiently loaded, there will be a net decrease in flux per pole. This will directly impact the emf and torque developed, which will impact how well the machine works.

In addition to this,. There will be some flux along the machine’s q-axis (brush axis) due to distortion in the flux distribution. This makes commuting challenging. The armature reaction is explained in some detail in the sections. That follow, taking into account the motor and generator modes separately.