Erosion by wind and developed features 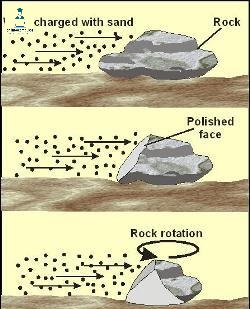 Erosion by wind and developed features – Abrasion and Deflation

The earth is surrounded by an envelope of gases called the atmosphere. The movement of the atmosphere in a direction parallel to the earth surface is wind.i.e. the air in motion is called wind whereas the vertical movements of the atmosphere are termed as air currents.

Erosion by wind and developed features:

Deflation is the process of simply removing the loose sand and dust sized particles from as area, by fast moving winds. Wind deflation can successfully operate in comparatively dry regions with little or no rainfall and where the mantle is unprotected due to absence of vegetation.

Such a removal of loose fine particles may at certain places leave a denuded surface consisting mostly of hard rocks or coarse materials like gravel and is called lag gravel. This gravel layer prevents further deflation.

Vertical column of rocks are thus more readily worm out towards their lower portions and a result pedestal rocks are formed which wider tops have supported on comparatively narrower bases. Such type of rock formations is called Pedestal or Mushroom rocks.

The total sediment load carried by a wind can be divided into two parts. a) Bed load

The larger and heavier particles such as sands or gravels, which are moved by the winds but not lifted more than 30 to 60 cm of the earth surface constitute the bed load. Whereas the finer clay

or dust particles which are lifted by the moving winds by a distance of hundreds of meters above the earths surface constitute the suspended load.

Deposition of sediment by wind and the developed features:

a) Sand dunes b) Loess

Sand dunes are huge heaps of sand formed by the natural deposition of wind blown sand sometimes of characteristics and recognizable shape. Such deposits are often found to migrate from one place to another due to change in the direction and velocity of wind.

The active dunes can be divided into three types:

a) Barchans or Crescent shaped dunes b) Transverse dunes

These dunes that look like a new moon in plan are of most common occurrence. They are triangular in section with the steep side facing away from the wind direction and inclined

The gently sloping side lies on the windward side, and makes an angle of about 10 to 150

with the horizontal. They may have variable sizes, with a generally maximum height of about 335 meters and horn to horn width of say 350 meters.

A transverse dune is similar to a barchans in section but in plan it is not curved like barchans such that its longer axis is broadly transverse to the direction of the prevailing winds.

parallel to the direction of the prevailing wind. When seen in the side view they will appear to be triangular on an average. They may be 3 m height and 200 m long.

The finest particles of dust travelling in suspension with the wind are transported to a considerable distance. When dropped down under favorable conditions these have been found to accumulate in the different constituents the form of paper-thin laminae, which have aggregated together to form a massive deposit known as Loess.

Either to construct wind breaks or growing vegetation on the surrounding areas.